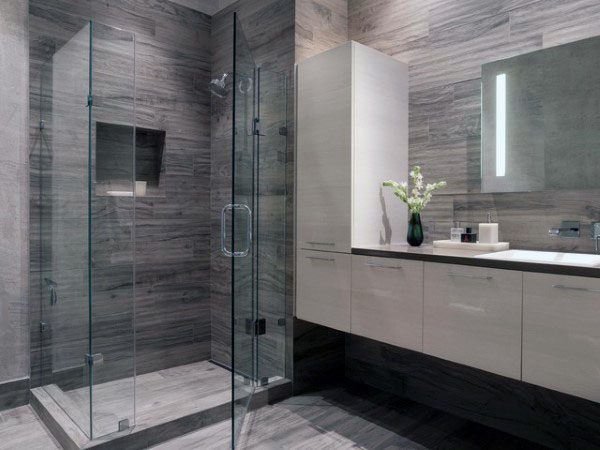 The daily jump in the early morning under the shower is not spectacular at first – but helps to flush the tiredness from the musty and still somewhat sleepy limbs! The start of the day will be interesting only with these baths – where the beauty program gets a fair frame and the eyes can barely get enough of a modern designed bathroom in the morning! Here you will find the most unusual ideas and shower realizations:

If the way under the shower can not be short enough for you, this shower is the perfect alternative – in one moment, drowsily getting out of bed, is after a few steps already under the wonderfully refreshing-invigorating jet of water. However, one should not be surprised at the curious looks of his partner in this shower, because these are inevitable!

The connection to nature

It is a feeling of unlimited freedom, closeness to nature and holidays when you can take a shower in the open air. However, if you are not living in warm regions of the earth, the open-air shower could only really give you pleasure for a few weeks of the year and more likely to give you the feeling that you have laid the water supply for free!

If you take a shower here, you’ll be wide awake in just a few minutes – with the shower cubicle, which is partly covered with onyx, it has a particularly invigorating effect. The two windows with natural light as well as the two niches, which illuminate the shower cubicle selectively and with the help of LED light, provide some relaxation.

Relatively simple and somewhat reminiscent of a Finnish sauna, this shower acts. Due to the massive wooden beams and the coarse natural stone, the shower is very rustic and gives the impression of life on the farm!

The alternative to the outdoor shower

In this shower, the morning washing ritual is combined with the comparison of the weather report from the previous evening, while at the same time it is possible to see which works are next in the garden. But you should take better care of the neighbors’ prying eyes!

This shower will pull you back to the disco after the last night of dancing and turn your bath into a light show. If you can not get enough of the colorful lighting games in discotheques, you will find your own stage here in the shower.

The stylish combination of tub and shower

Triste and practical shower trays were yesterday – what counts here is the tasteful combination of both! The tub is in the middle of the room and offers a quick morning shower and the perfect place for a long bathing experience.

Two in one – the tub in the shower

Anyone struggling with space problems in the bathroom can simply integrate their bathtub in the shower.

If you can not take a shower off the sofa, you’ll get the perfect alternative with this shower! On this stone couch, you can make yourself really comfortable and relax when needed and relax. For a small nap in between, you should turn off the water better – otherwise comes with the next water bill the angry awakening!

A rainforest shower for the home

Anyone who likes to dance in the rain as a child is in good hands under this rainforest shower – under the gentle shower, a real rainforest feeling comes on!