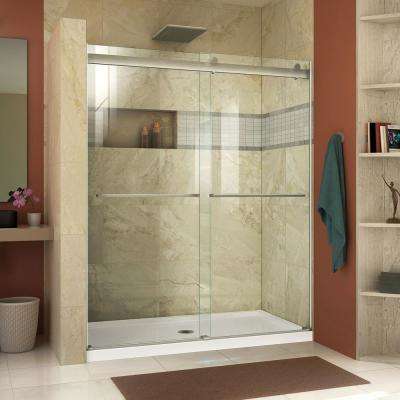 It is modern that you meanwhile design your bathroom with glass surfaces. It used to be known only from Hollywood movies in which nameless beach beauties showered with drug lords in a gymnasium-sized wet room. It was considered particularly noble and very expensive to visually upgrade his bathroom through glass surfaces – for example, the shower cubicle itself. In such a pleasure you came as a mere mortal at most once, once afforded 1 night in a fancy hotel. As one stood then amazed for half an hour in the shower and enjoyed this wonderful feeling, once again not bottled when showering in a pure utility room, but to experience a liberating feeling of space. But actually you can have it at home too.

Most people mistakenly believe that glass is inevitably a very unstable material, and that it should only be used where it can not be otherwise. This is a mistake, albeit a widespread one. Depending on the design and density, glass can even be extremely resistant. And glass surfaces in bathrooms are quite certain. If you install the right material here, the tiles will rather fall off the wall than the glass shower cubicle breaks into 1000 pieces – no matter what you do there alone or as a couple. Since you can confidently believe the manufacturers – glass is sometimes much stronger than, for example, marble. That is why more and more people are installing glass in their bathrooms, because the benefits are enormous.

Especially in small bathrooms, it makes sense to have the shower cubicle or a glass partition made. This makes the room much larger, because glass does not block the view through the room. Immediately disappears the oppressive feeling that you get when you step into a small bathroom. Most of the time you want to get out of there as fast as possible – and that does not have to be. Glass creates transparency and does not force itself on the viewer. They just look through and the glass steps into the background. So the other furnishings and decorations in the room have that say – and not a massive curtain wall or a boring and monotonous room divider.

But even in large bathrooms, glass shower cabins always look good. Thus, the room size can really develop their full effect and the glass in it emphasizes this still by his noble and at the same time unobtrusive discreet way. Glass is chic because the spaces or walls it encloses do not look so packed. Glass is neutral and serves the space instead of dividing it. In addition, glass can be combined as well as with any other material. Whether with chrome appliqué or natural wood – the other materials come to the fore and still provide their own, quiet accents. Even a mixture of transparent glass and frosted glass gives a nice effect. Then you can see through half of it – and the rest is private again.

The effects of fogged glass also play a role. If you take a long shower, the glass fogs with water vapor. Again, for the moment you are in the bathroom, this is something unique that is possible only with the material glass. Even the most grown-up adult will start painting graffiti and messages on the glass immediately – afterwards they have disappeared again. Overall, glass always gives the bathroom something bright, something friendly, which it would not have without the glass. And you’ll feel like a king or a queen as you wake up in a glass shower cubicle every morning – you do not have to be a drug baron or stay in expensive hotels all the time to afford the luxury of a liberated bathroom atmosphere ,